A little over two years ago, after the success of Whale Tales, one of my best friends (and fellow Whale Tales co-founders) Sara and I decided to start a small business together to offer our services (social media management and website design) to the world.  We didn’t really know if it would work and weren’t really planning on taking over the world, but we wanted to try and see how it would go. But first, we needed a name. We talked about a lot of ideas but really wanted something good but still represented us and our values. Something with a hidden meaning if possible. After throwing around a lot of ideas we decided on Physarum. It’s a genus name of a slime molds which are pretty cool (if you’re a nerd like us). Aside from liking we what found out about these species, we liked to be able to link back to slime molds because, as it turns out, that does have a special hidden meaning for us.

As you may know if you’ve read my other blogs I have two best friends, Sara and Nicole. Together we are #lifewivesforlife and have a podcast to prove it. What you may not know is that there is a FOURTH best friend in all of this, Michelle who lives far far away in Melbourne (previously Sweden and Newfoundland, she never lives here). It’s pretty rare that she comes to visit but one trip in 2015 it was remarked to us that “”You guys are more like a slime mold cuz you pull you apart and you just go back together again” and just like that #slimemoldforlife was born. 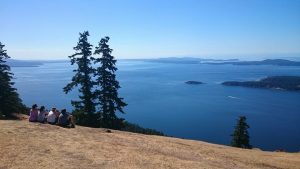 So, when we found a slime mold-esq name our company we were hooked. While we worked with our incredibly awesome graphic designer friend Ross we were advised to test the name around to see what people thought.  It was a mixed bag, most people didn’t really know what it was (“something science-y”) but didn’t feel negative about it. We were told then (and still are from time to time) that it was difficult to pronounce and spell but honestly, we were too sold on it to care. It was unique so would work for a hashtag and teaching people how to say it is a great conversation starter! 😉 Physarum Connections was a go.

It sill is difficult for people to pronounce (its fun when I go on job interviews!) and to spell which is honesty something I never thought of. I guess my brain is to biology ingrained to imagine someone having issues with spelling genus names. But hey, you are here reading this blog on the physarum website so I guess you figured it out somehow! And that’s really my feeling towards it. We never thought we were going to take over the world with our little company, and even if we did, the world would know about slime molds and therefore be a better place.

(this gif really has nothing to do with this post, it is just a great reminder that Sara doesn’t have an H in her name)

3 thoughts on “Slime Mold for Life”