How in the world is it July? Working at home means that I often don’t know what day of the week it is, and I don’t have a lot to count down to, so finding myself halfway through 2018 is even more shocking than normal.

But I digress. July it is so let’s get down to brass tacks (what does that saying even mean??) and start observing Plastic Free July. This social media holiday started in Australia in 2011 but is now celebrated all throughout the world in attempt to get people to use less plastic and recognize the problem that is plastic (single use and otherwise).

Don’t get too overwhelmed, I, at least, am not expecting you to fully give up plastic (I haven’t). I will talk about this more as the month continues but everybody has different lifestyles and needs and financial situations and therefore can only do as much as they can. So, let’s start with something easy.

Travel mugs for coffee or other hot beverages have been around forever. I know I used one when I first started drinking coffee in high school so its been at least 16 years (excuse me while I cry over my age) and they are one of the easiest routines to get in to. Whether you are taking coffee from home (cheap life hack!) or from a coffee shop, travel mugs are easier to handle, drink out of and keep beverages warmer longer than disposable cups. You often get a cup discount for using one (at least at Starbucks) and then there is the bonus of not throwing out a cup and lid (and java jacket). The lining of disposable coffee cups differs between chains and the recyclability of these cups also differs between countries, so you’ll have to check, but in Canada, most cups (and lids and java jackets) can be recycled. No matter where you are, a travel mug helps to reduce and reuse (remember those other words in the phrase??) and you don’t have to worry about the recycling rules.

When Sara and I were in Australia in 2007 travel mugs were not as popular and prevalent as they were in Canada at the time (at least where we were). We were on a road trip through South Australia and were in quite a few rural places and we would stop to get a flat white (mmmmmmmm) and got a lot of stares when we handed over our mugs to be filled up. At one shop the barista said she would have to measure in their mugs to see how much to charge us. This had happened before, so we weren’t surprised (no matter how often you tell people a normal travel mug is 16oz, they just cannot understand how mug sizing works). She used water to fill up their cups and pour into ours and then told us our flat whites would be $9 each! We said that we would go with a small size instead and she filled our mugs almost to the top. I still can’t figure out how that went down logistically but I would like to think that shop has sorted out their travel mug confusion by now.

Again, reusable water bottles have been around for at least my entire life, probably earlier. They have gone through some PR issues with BPA but all in all they are one of the best ways to reduce your plastic consumption. Single use plastic water bottles can take over 400 years to decompose and require 3 times the amount of water to make than to fill. Reusable bottles are durable, often hold way more water than a single use bottle and save you a lot of money when you are out and about since most places will fill them for free. When I was in elementary school and it was hot, I used to freeze water in my bottle over night and bring it in. Oddly that super cold water made me really popular in class (why was it so hot in my grade 7 class room?) including with my crush! 😉 Ah water bottles, good for so many reasons.

I know that sometimes all these single use plastic alternatives can lead up to a lot of extra stuff to bring every time you leave the house (that’s why you have a cloth bag!) but when you hear the stats and look at the photos of all the plastic pollution in the oceans, it is 100% worth it to lug a few things around. Again, its all about what you can in  your lifestyle and what you can change in your routine to help reduce the plastic use on the planet. And the 10-cent cup discount. 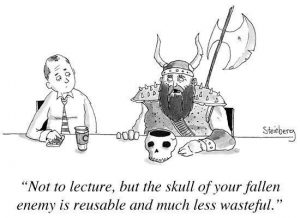