Happy September! I am so very glad it is fall, it’s definitely my favourite season with the leaves changing and the chill in the air, and the scarves and boots and the sudden decrease of tourists on my street and the sound of the rain as I lie snuggled in my bed. Yup, even the rain. September also happens to be the anniversary of my incredible book club. Since I’ve read other blogs and articles about how to have a long lasting, successful book club, I thought I’d share what has worked with us for the last eight years.

When we started in September 2011, we had one firm rule about our book club meetings: don’t talk about work.

For the first year or so I was the only person who didn’t work with everyone else and I had worked with them in the past. We were very prone to lapsing into work discussions and bitching whenever we were around each other and our founder (and president!) didn’t want book club to just be another one of those get togethers. We’ve stuck to this rule very firmly as people changed jobs and even now, as the ratio of people working together has dropped drastically, it is still something we hold up at ever meeting. We often have an “official” start to the discussion once everyone is present and that gives people time to talk about work or whatever (and eat!) beforehand and if work talk slips into the book discussion it immediately gets shut down. It may seem like a harsh thing to do but I find it great. I’ve learnt many things about people I’ve known for years that I never would’ve discovered if we had had a free range to discuss work constantly.

Other rules include the same start time for every meeting to ease confusion (I still get multiple texts beforehand asking what time we are starting!) and in order to vote for the next book, time and place you must be present at voting. We always take book recommendations from people unable to attend and will move the vote up if someone has to leave early, but this is a good way to keep voting simple and democratic. We alternate locations, heading outside whenever the weather allows and try to pick a date that works for everyone regardless of whether they are at the current meeting 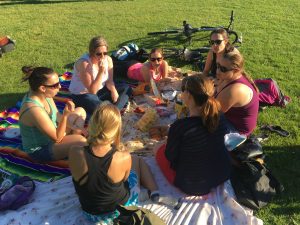 The other big “rule” we have is that you don’t have to read the book. Not having any pressure to read a book really helps keep people coming back. We do synopsis at the start of each meeting (ranging in time from 20 minutes to an hour and half!)  and that allows people who didn’t finish or read the book to be semi caught up in the plot and discussion.

With these guidelines we’ve had an amazing run of book club meetings and books (we are about to meet about our 76th book!).  We’ve had theme books and done secret santa, made a scrapbook for our fifth anniversary and most recently picked a book only by its cover (so judgy!) and just generally had a good time.

Everyone brings a snack and a drink, and we’ve grown to a great group of people that probably wouldn’t have gotten to know each other without this regular meeting every six(ish) weeks. Plus, out of the whole eight years we’ve only have two broken toes-can other book clubs say that?? 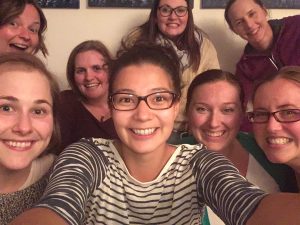