Ah November. It’s dark, its getting colder, you’re itching to put on Christmas music but you know it’s too soon (or is it??), all that good stuff. Plus! It’s the anniversary of Whale Tales. This year is our fifth anniversary, which is madness. You can read about our inception in one of my first blogs but today I wanted to look at where we have come in five years and also since that first blog.

I can give you lots of stats and numbers if you are interested: over 700 stories posted, over 30k Instagram followers (yup that’s a big one), over 25 species of cetaceans in over 15 countries, over 10 regularly contributing storytellers….those may not mean much to you but they do mean a lot to me (and us). These numbers have been a lot of work (and a lot of luck) over the past five years and I am proud of every single one of them. Now I am little obsessed with round numbers which is why I set myself the goal of 700 stories for our fifth anniversary. That was a bit of an insane thing to do with all the work I had this fall, but again we got lucky and secured a couple new regular storytellers in the past few months so I actually had enough stories to put up I just needed the time and somehow I made it work (by shirking other responsibilities-oops). Hopefully this will work for 2020 as well as I aim even higher and try to achieve a very nice solid round number by our sixth anniversary…

One of other goals I had for our anniversary was 30k Instagram followers. This was harder (even though it was achieved earlier) because I had very limited control over it. I could post high quality content on our Instagram but I was already doing that (humble brag) so I just had to look at our analytics and do some estimating as to how many followers we normally gained a week and if we continued to follow that path, would we do it? We did but it was slower than I originally expected and since Instagram now gives you a stat of how many people unfollow you each week, it ended up being almost a negative experience for me…or at least not as an exciting one. When you are so close to these numbers and follow them (perhaps a bit obsessively) every week you loose track of the larger picture. 30,000 followers! Even more than that now! It’s kind of insane. When I do look at the large number, I don’t really know what to think. I cannot believe that that many people want to follow something I do and helped create….and sometimes post on in my pajamas while I watch Brookyln Nine-Nine (again). But here we are and as I stated in another of my first blogs, people love whale photos and so our numbers grow and if they get educated about us or whales or issues facing marine life well bonus for us! (Instagram is also how we found most of our storytellers that we didn’t personally know, so double bonus!)

Aside from these numbers and stats we also have done a ton of other things in the past few years. We have a Tales of Saving Whales blog series about how people change their lives to help marine life, we launched The Naming of Things this year, another blog series about how cetaceans are named and what their names mean (some of these posts like our Killer Whale vs Orca one have proved very controversial!). We have merch and a Patreon and in April we launched a podcast. I think to me (and probably all of us), the podcast is the shining star of the Whale Tales Enterprise (ooh I just created that-TM TM TM TM!). Not only does it allow us to regularly talk to one another, we also get to deep dive (pun very much intended) into super random and fun facts about cetaceans, some that we didn’t even know about beforehand and share our whale encounters as well as other peoples. It’s great and I love it and you should too 😜 Go subscribe!! 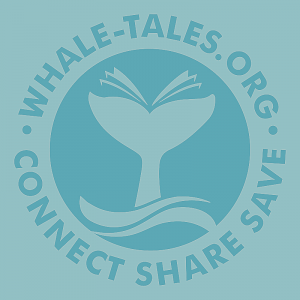 I also really started focusing on Instagram stories this year for our account (perhaps one of these reasons why I wrote two blogs about them this year?). With the swipe up option that we get (because we have over 10k followers) it’s a new avenue to get people to our site to read our stories. When I look at our analytics it still amazes me that people read our stories and go to our website and look around (and also listen to our podcast). It amazes me that I can do something that I love so much and other people actually enjoy it too. Maybe one day I’ll even get paid for it (did I mention our Patreon and merch? 😉)

Its weird to look back at the beginning of Whale Tales and think about how much it changed my life. I think about it every day, I work on it every day and it was what made me who I am today. That sounds like a hyperbole but it’s not. Without Whale Tales I wouldn’t have discovered my love for social media and probably wouldn’t have left my horrible job (shudder). So, as I have said many times before and will continue to say for the indefinite future, thanks everyone for your support (and stories even if I had to bully them out of you!). It means more than I can say.

PS: in case you didn’t get it enough in the post: head to whale tales to read all our stories and submit your own, follow us on social media at @whaletalesorg (we need more Instagram followers! 😜), join our Patreon, buy our merch, subscribe to our podcast and check out the list of things you can do to help cetaceans and marine life so they can survive and thrive and I can still do this, my favourite job of all.