There are a lot of stats about how many different careers my generation will have. So, I felt pretty okay about taking a leap into the unknown and completely switching career paths (see my first blog for a in depth discussion on THAT). But here is the thing about changing careers in your thirties. It manages to make you feel young and old at the same time. Magic, right? It’s such a weird feeling and a tricky one to manage when you are constantly going on interviews and trying to convince people, including yourself, that you have the skills and experience to do this job.

I knew when I started thinking about working in social media professionally that it was new, and I would have to pay my dues and that has never been an issue. However, now that I’m talking to people who actually know what my job is (see my second blog on THAT!), I often end up in interviews with people telling me that they don’t know a thing about social media and that they only have a Facebook page because their spouse made them or something, but they have no idea how to work it. That’s fine. And something I would assume is normal in other jobs as well? That’s why they are hiring you right? What I have trouble with are the young influencers who are also interviewing for these jobs. Those who seem to have their finger on the pulse of the movement (blech, what does that even mean?!) and who look and dress like they should be social media marketers and just *know* everything already because they were born into it. Those are the people that make me feel like I’m a teenager again who doesn’t know anything and is playacting at being cool. How can I ever compete with those types of influencers?

But wait! I AM a social media influencer (fifth blog-man I am referencing a lot of old blogs today!). I have experience with a variety of different content types AND I’ve been in the job force for sixteen years (good LORD I am old! ☹ ) so I actually know how to be responsible and communicate. Case in point: I was waiting outside an interview once and just heard a snippet of the interviewee saying “ever since I’ve turned 19…” 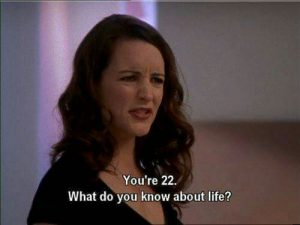 Man did I feel old. But then during my interview they actually brought up the issue with the younger applicants not really having a work ethic and seemed genuinely impressed when I said I was a hard worker and had examples of going the extra mile. So, I guess aside from my amazing Instagram stats I do have a leg up on all these “youngins” by being in my thirties and having worked since I was 18? That’s not easy to convey on a resume or a LinkedIn profile but it does help with the paying of the dues and the working hard at every opportunity that comes my way. So, go me. I’ve got three and a half years of social media experience and 34 years of LIFE experience.  Kablamo. Nailed it.